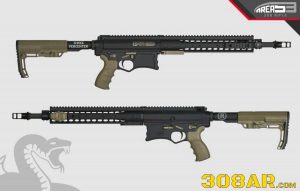 A Three Percenter Rifle:  During the American Revolution, the active forces in the field against the King’s tyranny never amounted to more than 3% of the colonists. Three percenters today, for the most part, identify with this 3% because they were true patriots fighting for the freedoms the nation we love and honor was founded on. Three percenters intend to maintain their God-given natural rights to liberty and property. History itself, for good or ill, is made by determined minorities. Never underestimate the power of a small group of committed citizens to change the world. Indeed, it has never been done otherwise.
AREA53 THREE PERCENTER 308AR Specifications: