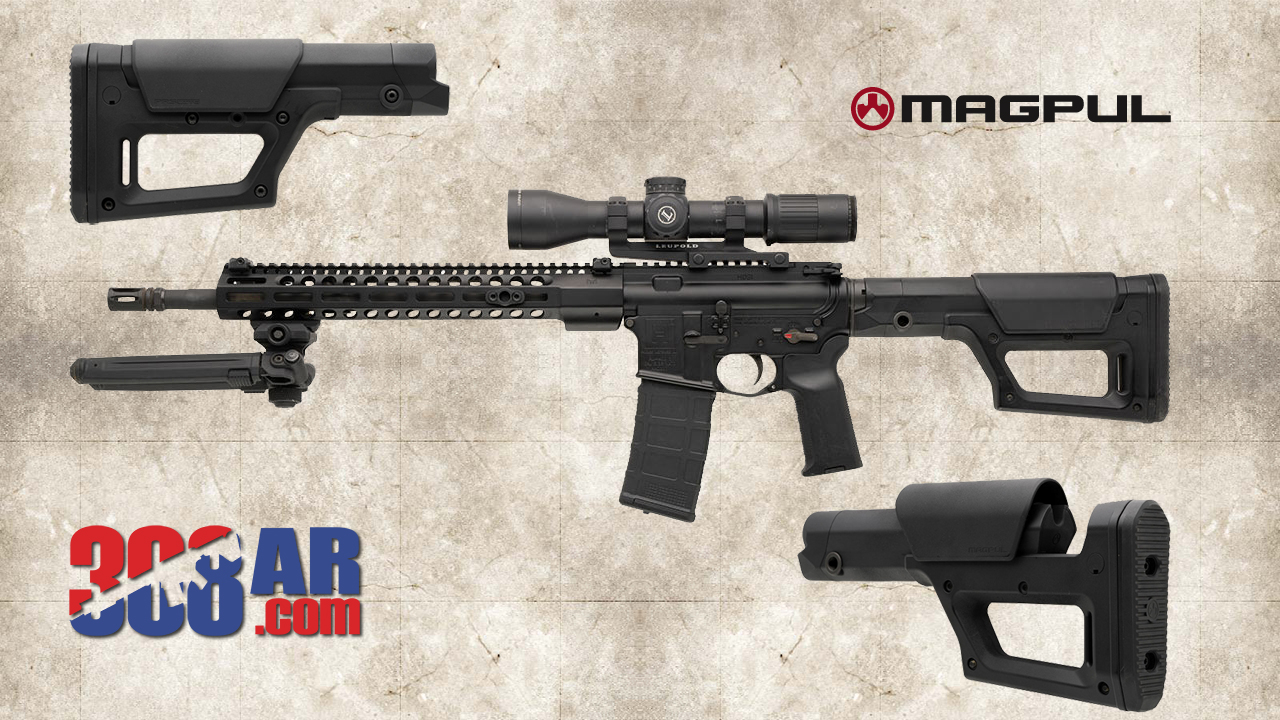 The Magpul PRS Lite stock provides similar adjustability and features of the PRS GEN3 Stock with the added benefits of reduced weight and a price that’s almost half of its fully-featured counterpart. At 10 ounces lighter than the PRS GEN3, it provides an optimized shooter interface with .8” of comb height and 1.4” of LOP adjustments for carbine/SR25/A5 extension tubes for .223 and .308 receiver-pattern rifles. The low-profile rubber butt-pad is adjustable for height and cant and provides a stable interface with the shooter’s shoulder. There are multiple attachment options for slings, including an ambidextrous 1.25” footman’s loop, a reversible QD sling swivel cup, and space for another optional QD sling swivel cup. 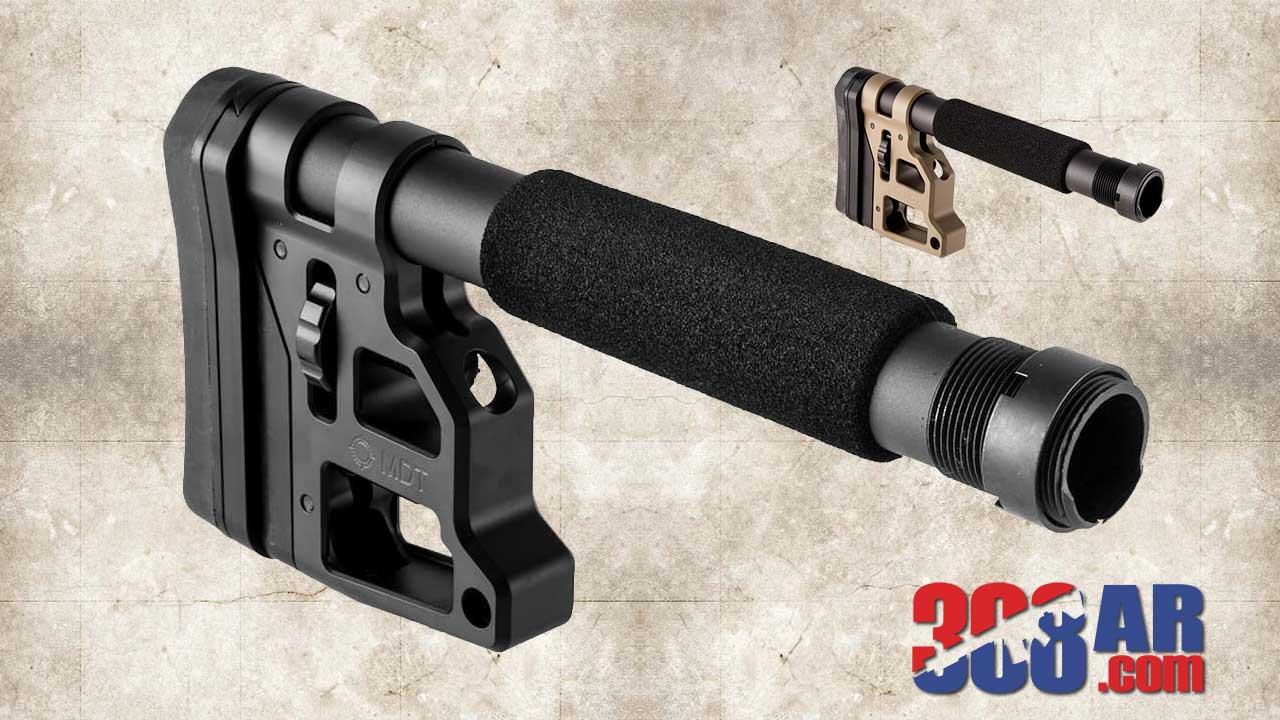 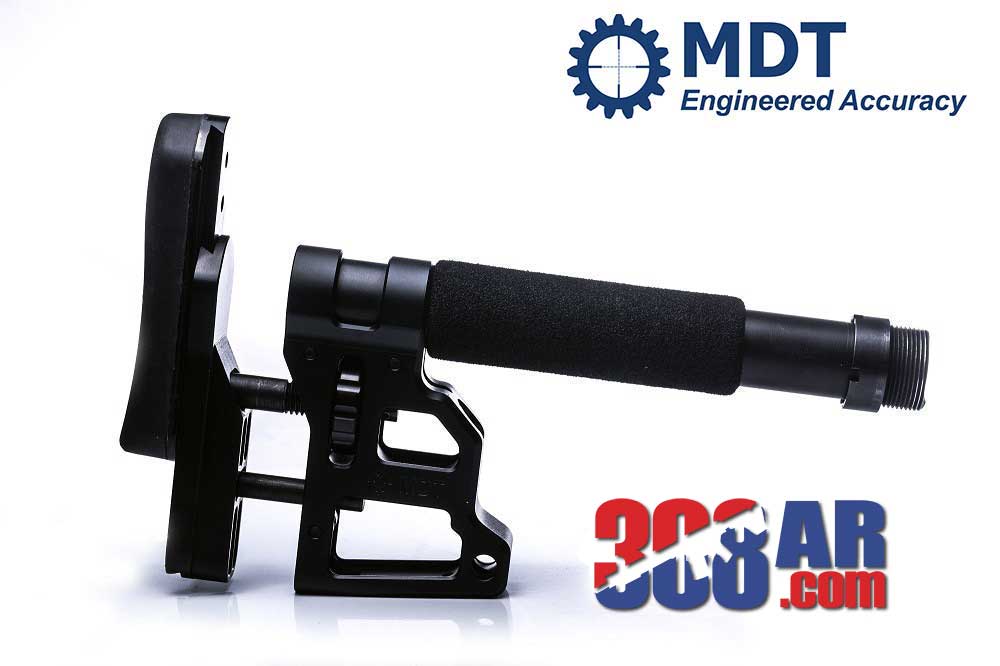 Modular Driven Technologies aka “MDT” is well know for being a leader on bolt action rifle chassis particularly their TAC21. MDT is also the rifle chassis provider for Brownells, Winchester, Weatherby and Mossberg to name a few. Many shooters may not realize that MDT also offers a skeletonized carbine stock that with proper buffer system hardware can also be used with the AR-15, AR-10 and 308 AR rifles (See the chart below). The MDT “SCS” is a great Magpul PRS alternative. Available in black or FDE. 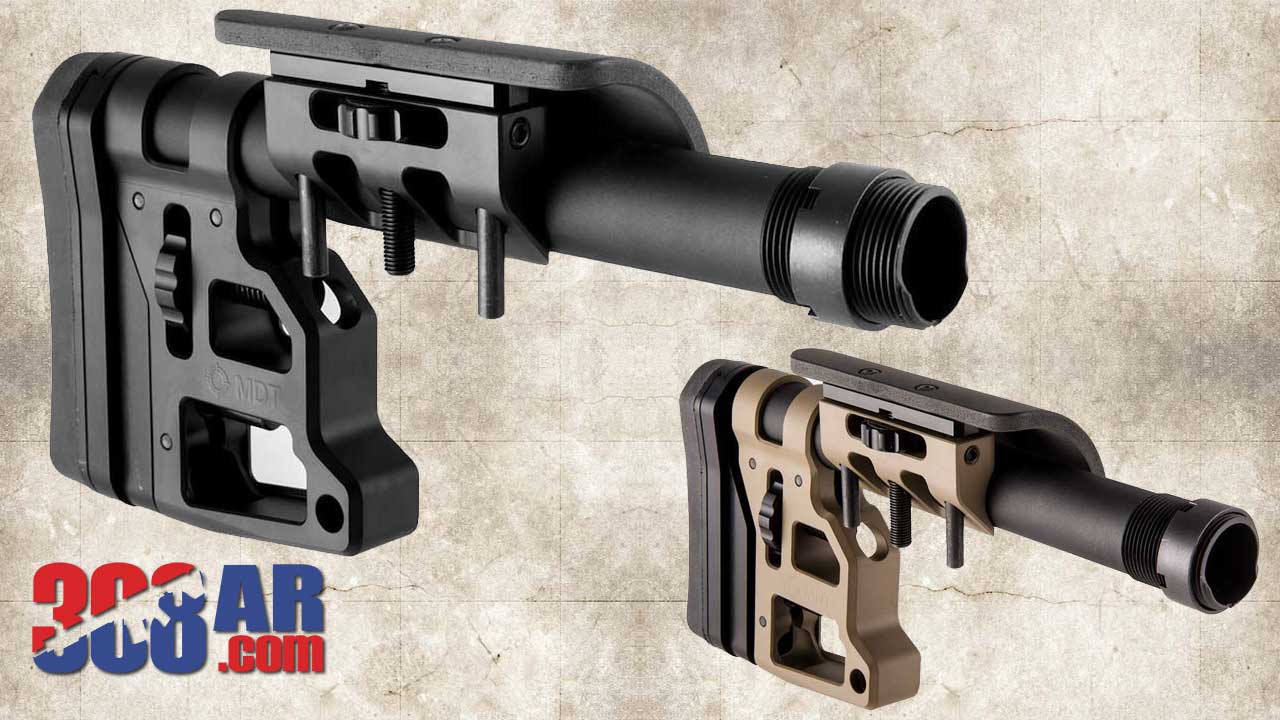 For about thirty dollars more than the standard MDT Skeleton Stock there is an upgraded version of the carbine stock the includes and adjustable cheek riser.

The MDT SKELETON CARBINE STOCK has been designed to allow maximum adjustability while minimizing weight. The adjustability allows each shooter to optimize superior ergonomics for multiple shooting positions. The weight has been minimized by skeletonization while retaining the strength of the stock. The SKELETON CARBINE STOCK is crafted in 6061 aluminum with Cerakote®.

The SCS without the cheekpiece weighs 1.43-1.48lbs depending on the length of the buffer tube used and without spacers.

The SCS has 3 QD attachment points (one on each side and one on the bottom) to allow the shooter multiple choices for carrying. The SCS also has provision on the bottom of the stock to allow for the attachment of a picatinny rail.

The user is able to finely adjust the LOP by using the wheel mechanism located on the body of the SCS. LOP can be locked into position by tightening the lower bolt. The angle of the SCS can also be adjusted by loosening the top two screws on the body. This allows the body to align with the buffer tube by using the scribe mark down the buffer tube and the offset scribe mark on the SCS body.

A soft foam guard has been placed on the SCS to allow for use with low optics. This foam guard provides comfort against the elements. The foam guards position is able to be adjusted by moving it horizontally along the buffer tube.

MDT offers various buffer tubes lengths to allow shooters to choose their Length of Pull. To use these buffer tubes with AR-15 and AR-10 buffer systems, one or more spacers will be included with your purchase.

The buffer tube comes in various lengths to allow for proper Length Of Pull (LOP) for any rifle, while maintaining the correct internal length for an AR-15 buffer system.

With solid adjustments for length of pull and cheek piece height via aluminum detent knobs, the PRS GEN 3 (Precision Rifle/Sniper) stock provides a stable interface and is intended for semi-automatic sniper or varmint type rifles. Offering a nearly universal fit, it is optimized for rifle-length receiver extensions but will also mount to many mil-spec carbine and A5-length tubes*. Includes a cant/height-adjustable rubber butt-pad and rotation-limiting QD sling swivel cups as well as M-LOK® slots on the bottom for rear monopod mounting. Made in U.S.A. Visit  Magpul.

*NOTE: Due to the wide variety of designs and dimensions of carbine receiver extensions as well as the associated mounting hardware, proper fit cannot be guaranteed.  Mounting to a rifle-length receiver extension is recommended to ensure optimal fit and function.

* Specifications based on factory configuration. 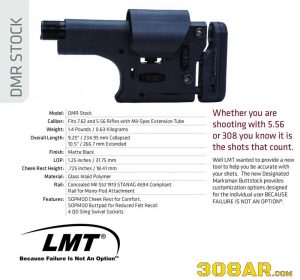 In my opinion  the LMT DMR308 STOCK looks to be styled after the MAGPUL PRS. 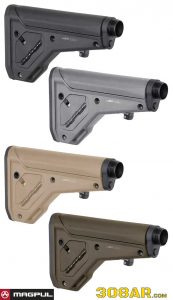 MAGPUL UBR 2 COLLAPSIBLE STOCK is an adjustable stock for the 308AR, AR-10, AR15 M4 designed to offer the same strength and stability as a fixed stock with a consistent and comfortable cheek weld in any position. An update of the revolutionary Utility/Battle Rifle (UBR) stock, the UBR 2 features a fixed cheek piece to provide a consistent cheek weld in any of its 8 positions, and is compatible with A5-length buffer systems. Designed to accommodate large bore AR calibers and withstand severe impacts, the UBR comes standard with front and rear QD sling attachment points, a recessed footman’s loop, the ergonomic MOE SL angled-toe rubber butt-pad, and storage compartment. Buffer tube included, compatible with A5- length springs and buffers as well as carbine springs and buffers (with included spacer). 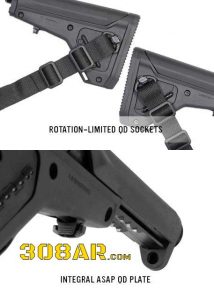 MAGPUL UBR 2 COLLAPSIBLE STOCK is an adjustable stock for the AR15/M4, designed to offer the same strength and stability as a fixed stock with a consistent and comfortable cheek weld in any position.

An update of the revolutionary Utility/Battle Rifle (UBR) stock, the UBR GEN2 features a fixed cheek piece to provide a consistent cheek weld in any of its 9 positions, and is compatible with Carbine as well as A5-length buffer systems. Designed to accommodate large bore AR calibers and withstand severe impacts, the UBR GEN2 is nearly five ounces lighter while retaining all the durability its predecessor was legendary for. Comes standard with front and rear QD sling attachment points, two footman’s loops, the ergonomic MOE SL™ angled-toe rubber butt-pad, and customizable storage compartment. Made in U.S.A. 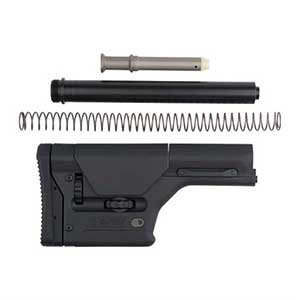 Brownells is running a special on the Magpul PRS stock with the parts needed to complete the buttstock installation on your 308AR build. All three colors are in stock. Click here for ordering information. 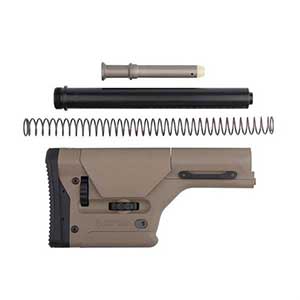 308 AR PRS Buttstock Kit – Solid construction with an adjustable length of pull and cheekpiece height make this stock an excellent option for varmint and long-range target rifles. The 28 oz weight adds heft and balance to heavy-barreled rifles. Requires standard rifle-length A2 buffer, receiver extension buffer tube, and spring (not included). Includes mounting hardware and 2 ambidextrous sling loops. When compared to the standard A2 stock, the MagPul PRS length of pull adjustment goes from .25″ shorter than the A2 to .75″ longer than the A2.

Fully adjustable stock and comb for .308 AR rifles readily adapts length of pull and comb height with two click-detent adjustment wheels. Rubber buttpad seats securely onto your shoulder and won’t slip during sustained shooting exercises. Fully-raised comb will not get in the way of charging handle operation. Removable base cover conceals an accessory rail to provide a mounting platform for a monopod. Removable sling loops can be mounted on either side of stock to accommodate your preferred carry position. 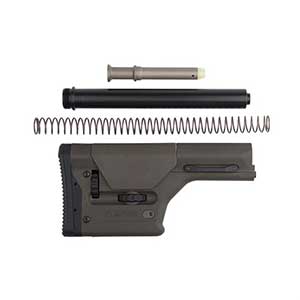