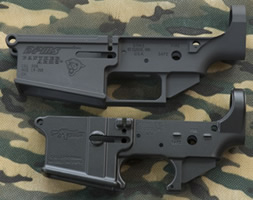 A gun owner does not need to be a genius to understand what is at risk with the upcoming presidential election. Hillary Clinton’s gun control position is well known. If elected she no doubt has the perfect timing and opportunity to devastate or Second Amendment and god given right. She no doubt will appoint a Superior Court Justice that will severely tip the vote more anti-gun liberal than it is now. Donald Trump is something altogether something different and an unknown. We do know despite coming out very pro gun he is also a New York Republican. That should not be underestimated. Learn from past mistakes and  buy 308 AR Lower Receivers Now.

Why should I buy 308 AR Lower Receivers?

Why should I buy 308 AR Lower Receivers? There are a few answers to this question.

What 308 AR Lower Receivers Should I Buy?

While the choice of which 308 AR Lower Receivers to buy is personal preference I will attempt make a few points to consider before buy. In my opinion it’s best to buy 308 lowers that are as DPMS 308 compatible as possible (Not DPMS G2). Avoid the designs that use unique Bolt Carriers, Safety Selectors and Barrel Extensions. The DPMS 308 AR Upper and 308 AR lower are the most copied receiver profiles. This fact makes the style pretty interchangeable. If you are considering a 308 AR Lower that is somewhat unique in profile it would also be a great idea to buy the matching upper receiver at the same time.

Below are links to 308 AR Receivers mostly at Brownells. Keep a watchful eye on the Aero Precision Website. They are expecting to be caught up with the 308 rifle backlog very soon. Don’t forget to visit your local gun shop. Often they have overpriced but available stock. Look for gun shops that specialize in AR Rifles and Silencers.