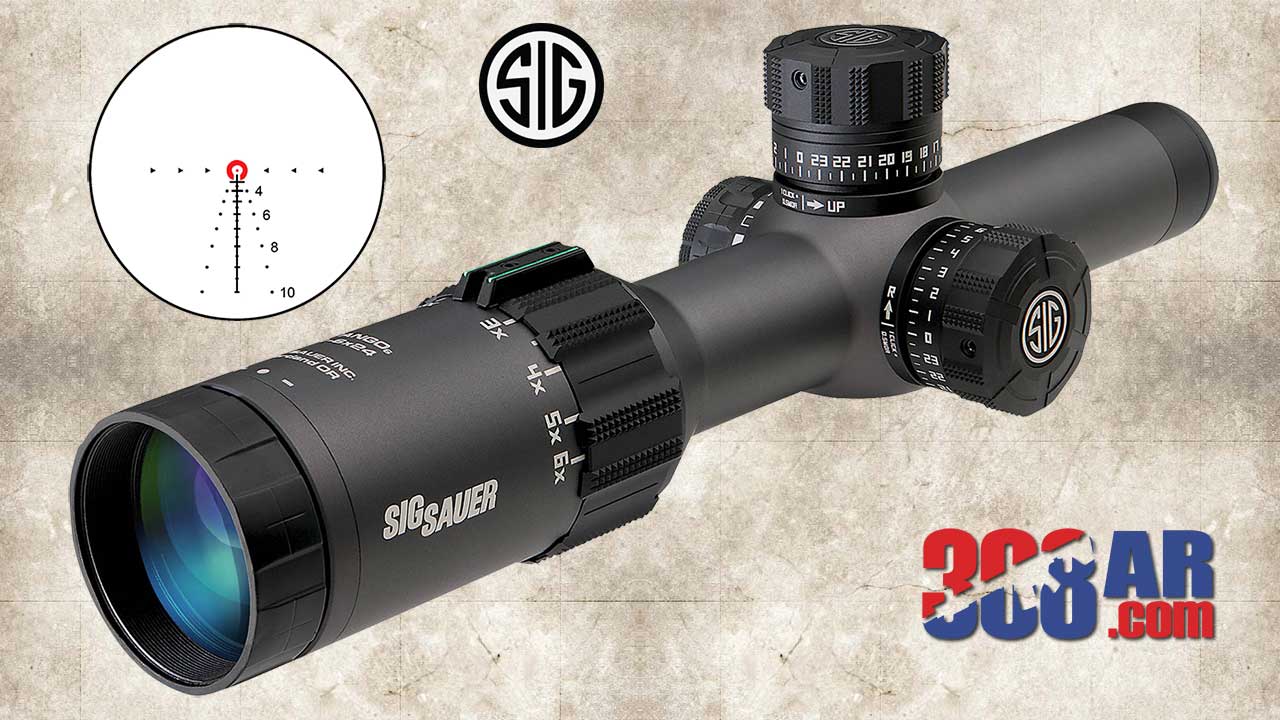 Selected by the U.S. Army for both the Squad Designated Marksman Rifle System and for U.S. Special Forces, the Sig Sauer TANGO6T is available in the commercial market. Designed for today’s common MSR/AR and bolt action platforms, this scope is the ideal solution for CQB / mid-range tactical engagements, 3 Gun competitions, and hunting. The Sig Sauer TANGO6T is complete with Sig’s HDX optical system for extreme clarity and low-light performance, HellFire fiber optic and glass-etched illuminated reticles, and first or second focal plane designs.

The Sig Sauer Tango6T 7.62mm 1-6x24mm 30mm Riflescope w/ Illuminated Reticle is an excellent optic for hunters, competitive shooters, and tactical operators. Sig Sauer built these Riflescopes with HDX optics extra-low dispersion (ED) glass paired with high transmittance glass (HT) to create the brightest and most vivid sight pictures for your shooting needs. This Sig Sauer Tango6T 7.62mm 1-6x24mm 30mm Rifle Scope features Night Vision (NV) illuminated reticle settings so that law enforcement and hog hunters can easily use this scope with their NV gear. You’ll acquire targets quicker than ever before thanks to the illuminated reticle and fast focus eyepiece, and the reticles are also glass-etched in case you run out of power. Mount a Sig Sauer TANGO6T 7.62 1-6x24mm 30mm Waterproof Riflescope onto your firearm for a superior sighting experience you won’t find anywhere else.

SIG Sauer Electro-Optics has been awarded a major contract to provide the US Army’s new Direct View Optic (DVO) which will be used on the current M4A1 carbine, replacing the venerable ACOG . An award notice was posted on Sam.Gov at the end of last month with the value of the contract listed as $77,168,400.

The DVO program is seeking an optic that can replace the M150 Rifle Combat Optic, the Trijicon TA31RCO which entered service in 2007 through the Advanced Combat Optical Gun sight (ACOG) program. The M150 has an effective range out to 500 meters but the US Army is seeking a DVO capable out to 600 meters. In May 2019, predating the DVO solicitation, the USMC also launched a search for a new rifle optic to replace their ACOGs, in service as the AN/PVQ-31.

The US Army’s Contracting Command, based at Picatinny, New Jersey, issued a Prototype Project Opportunity Notice (PPON) in July 2019. The requirement called for:

The Army’s criteria for the optic become a little clearer in other documents issued with the PPON. Along with the usual operational environment capability requirements for heat, vibration, environment, durability, etc. The Army required the DVO to have a passive reticle with “an Army specified reticle pattern with free-floating windage and range adjustment marks/numbers.” As well as ” an illuminated center aiming feature visible under all lighting conditions including total darkness.”

The successful DVO entrant had to be Picatinny rail compatible, ” mount an objective lens Laser Filter Unit that attaches to the objective lens end of the optic” and has an optical sight box center line of 38.1 ±2.5mm [1.5 ±0.1 inches] from the top of the rail. The optic had to be no longer than 10.5 inches and use AA, CR123, or CR2032 batteries if necessary.

Neither the US Army nor SIG Sauer has yet released further details on which optic has been selected or how many have been ordered by from the contract value we know a substantial follow-on award has been made and the original solicitation stated that a maximum quantity of 120,000 DVOs will be ordered. The follow-up production contract will be for five years.

Army Contract Command awarded a $77 million contract to Sig Sauer to furnish the service with a Direct View Optic (DVO) back in October, but neither the service nor the company detailed which specific optics would serve as the DVO at the time.

On Monday, Sig Sauer announced that its TANGO6T optic — the same one currently in use with the Army’s Squad Designated Marksman Rifle (SDMR) and as U.S. Special Operations Command’s Squad-Variable Powered Scope (S-VPS) — was the subject of the contract.

“This is a three-peat for the TANGO6T as the riflescope continues to prove it will withstand the rigors of U.S. military testing making it the choice for use with our soldiers,” Sig Sauer President and CEO Ron Cohen said in a statement.

The DVO would allow soldiers to quickly switch between 1x and 6x magnification in contrast to the fixed magnification standard on the existing Rifle Combat Optic (RCO) that’s currently in use in close combat formations.

Army units currently deployed with a combination of the RCO for targets at roughly 500 meters and the Close Combat Optic (CCO) for targets at 300 meters, as Military.com previously reported.  With the DVO, soldiers would be able to target enemy fighters with remarkable accuracy at ranges of up to 600 meters.

Soldiers have fielded the RCO since 2007 and Army officials are reportedly ready for a change as the service continues to pursue its modernization priorities.

While the new contract allows for the delivery of new optics over the next five years, it’s currently unclear at this time how many DVOs the service plans on ordering from Sig Sauer.

SIG SAUER, Inc. is proud to announce the TANGO6T has been selected by the U.S. Department of Defense for the Direct View Optic (DVO) in response to a solicitation to enhance squad performance with a variable powered rifle scope. Unlike older generation non-magnified or fixed-magnification optics, the TANGO6T is a 1-6X variable-magnification rifle scope that enables the soldier to engage both close quarter targets and targets at extended ranges.

“After rigorous and stringent testing, where the best of the industry competed, we are proud to confirm the SIG SAUER TANGO6T riflescope has been selected by the U.S. Army as the Direct View Optic,” began Ron Cohen, President and CEO, SIG SAUER, Inc. “This is a three-peat for the TANGO6T as the riflescope continues to prove it will withstand the rigors of U.S. military testing making it the choice for use with our soldiers. The further proliferation of the riflescope into the U.S. Military’s M4A1 operating system is an exciting achievement for SIG SAUER Electro-Optics and further proof that the TANGO6T is the direction of the future.”

“The TANGO6T riflescope platform has been ruggedized and battle-hardened over the course of both the SDMR and S-VPS programs,” added Andy York, President, SIG SAUER Electro-Optics. “We are proud to assemble the TANGO6T here in the USA to support our warfighters with a variable powered riflescope that was developed to match the engagement requirements of today’s battlefield.”

The SIG SAUER TANGO6T 1-6x24MM riflescope is available commercially at local retailers and at sigsauer.com, in first and second plane, and varying reticles including 5.56/7.62 Horseshoe Dot, HELLFIRE MOA Milling, HELLFIRE FL-6 and the new DWLR6.

“This award solidifies the TANGO6T as the premier riflescope of the U.S. military as it continues to exceed the highest standards for ruggedization, range, and accuracy throughout testing protocols, and in the field with our soldiers. We are honored to partner with the U.S. Department of Defense as they continue to modernize their weapons systems and look forward to the continued proliferation of the TANGO6T among our fighting forces,” concluded Cohen.

All SIG SAUER TANGO6 riflescopes are designed and assembled in the USA at the state-of-the-art, ISO-certified, SIG SAUER Electro-Optics facility in Wilsonville, Oregon.