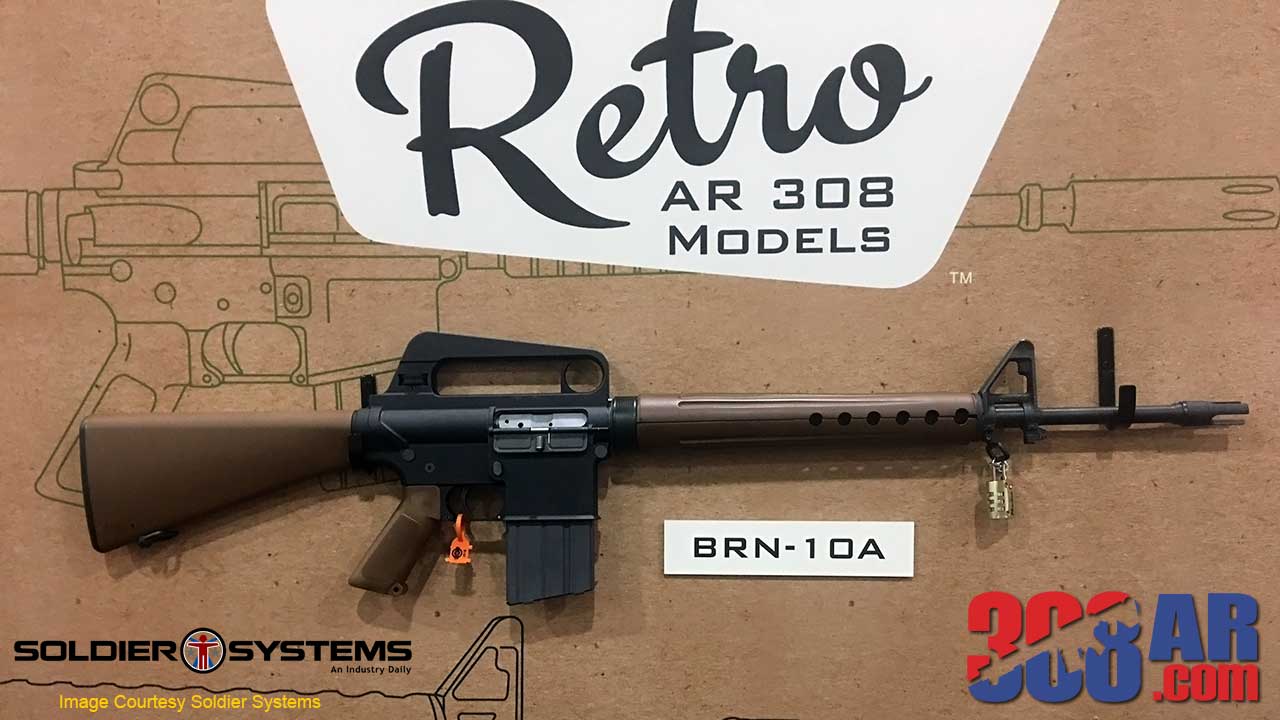 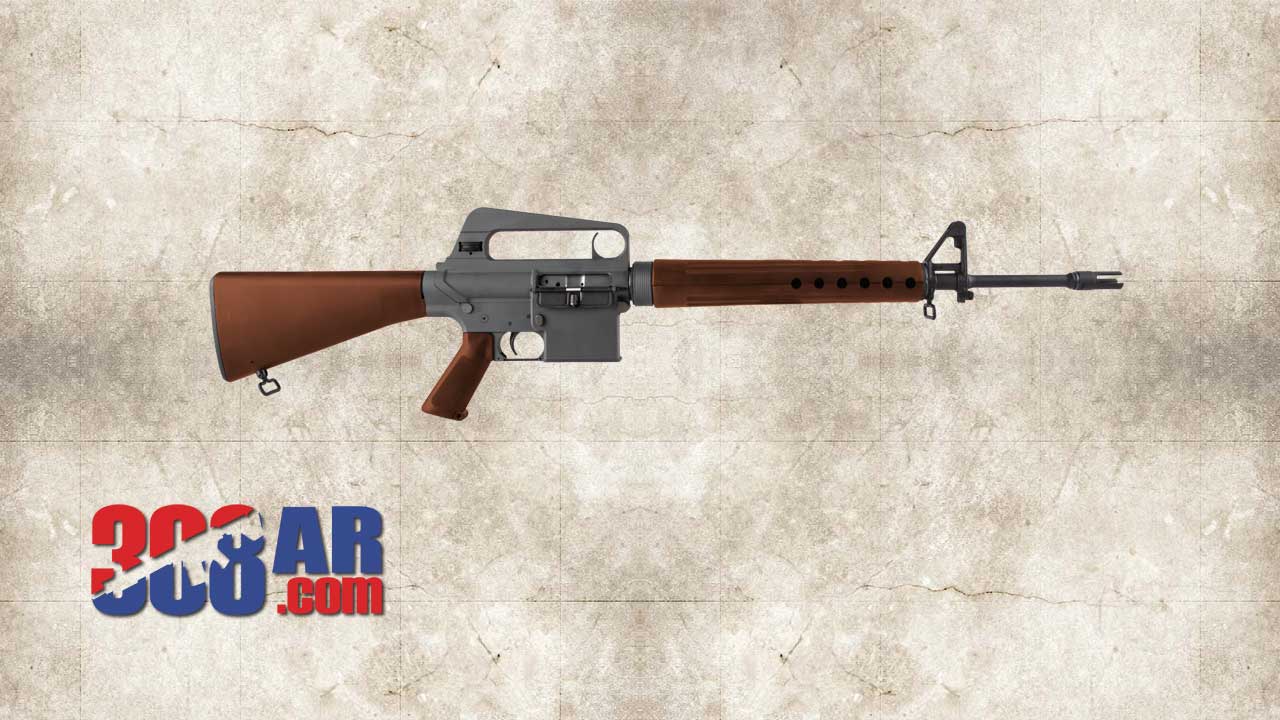 For the first time in Brownells history, the company is manufacturing complete guns of its own in addition to selling tools, components and firearms made by other companies. It should come as no surprise that the new rifle line-up is composed of AR-15s and AR-10s considering the company’s long standing relationship with these platforms. However, the Brownells choice to offer carefully researched “retro” reproductions of historically significant models is certainly a refreshing one for enthusiasts and collectors alike.

The first four Retro AR-15s are chambered for .223 Rem./5.56 NATO. The BRN-16A1 is a semi-automatic version of the iconic M16A1 first fielded in the 1960s with matte gray anodized receivers, properly contoured black polymer furniture and a lightweight 20” M16A1 chrome-lined barrel. The BRN-601 is based on the original USAF contract rifle with green furniture, a slabside lower receiver and a triangular 601 charging handle. The XBRN16E1 reflects the transitional rifle in between 601 and M16A1, with features of both. The XBRN-177E2 is an authentic reproduction of an early Special Forces carbine featuring a period-correct flash hider with grenade ring, a full-fence M16A1 lower receiver and a collapsible stock.

The two variants of the BRN-10 rifle, based on the AR-10, are chambered in .308 Win./7.62 NATO. These models have the “trigger style” charging handle located on the top of the receiver inside the carry handle along with the same lines and contours as the first production AR-10s from the 1950s. With receiver sets designed in conjunction with FM-Products, these rifles are compatible with standard DPMS/SR25 components including triggers, magazines, barrels, bolt carrier groups and furniture sets. The BRN-10A (shown) has the same brown furniture found on early rifles, like the models issued by the Netherlands, while the BRN-10B is based on later models adopted by Cuba and other nations.

Brownells is taking pre-orders for Retro rifles now with shipping dates slated for the Spring of 2018.

A Piece of History, Fresh from the Factory & Ready To Shoot

The BRN-10™ by Brownells is a recreation of Eugene Stoner’s original lightweight .308 caliber battle rifle that revolutionized rifle design forever. For the first time, it is possible for the shooter of average means to own – and shoot – a meticulously detailed, factory-new, semi-auto replica at a fraction of a scarce original’s price. The BRN-10™ accurately replicates the original .308 AR in great detail – and it’s built to modern standards using the latest manufacturing technology.

Clean, Uncluttered, Still “Futuristic”. The absence of a forward assist and shell deflector makes the BRN-10™ upper unusually uncluttered. Up top is the original “trigger”-style charging handle prominently located under the carry handle and positioned for rapid, easy operation – a practical benefit somewhat lost with the later charging handle location.

The BRN-10’s rear sight is fully enclosed by the carry handle, like the original. A simple, A2-style horizontal thumbwheel lets you adjust elevation, while windage is changed by loosening a setscrew and drifting the rear peep. A small window in the rear of the carry handle lets you see the current elevation setting.

Detail Under the Hood. Inside the BRN-10™, the carrier has the distinctive flats and two stabilizing flanges at the rear found on early carriers, and the entire bolt/carrier group is chrome-plated. The bolt itself is machined from 9310 carbon steel and magnetic particle inspected (MPI) to make sure there are no microscopic flaws that could cause premature failure – a benefit the original guns did not have.

The BRN-10’s 20″ barrel, chambered in .308 Winchester, is made for Brownells by Faxon. It first gets a QPQ Nitride finish for excellent resistance to surface wear. After nitriding, the barrel gets top coat that replicates the look of the classic manganese phosphate finish found on the 1950s rifles.

The handguard drops in like a standard AR-15 handguard, but its external contours replicate the original AR-10® ’guard. Buttstock and pistol grip are from the Brownells Retro line; the buttstock is a Type D stock, without a trap door.

Choose Your Model. The Brownells BRN-10™ rifle is available in two models. The BRN-10A leans heavily on the earliest rifles, with an open 3-prong Dutch-style flash hider, functional heavy fluting on the barrel under the handguard, and brown furniture that mimics the look of the original fiberglass. The BRN-10B is inspired by later export rifles and has a closed-prong, Portuguese-type flash hider, later-style black furniture, and a lightweight barrel that makes for a surprisingly quick-handling .308 rifle.

Up-to-Date & Compatible. Brownells BRN-10™ rifles accept standard metal DPMS/SR-25 magazines. They are NOT compatible with Magpul PMAGs due to lower receiver contour. A majority of the components on the BRN-10™ are compatible with modern DPMS/SR-25 parts or AR-15 parts. See Compatibility Notes below.