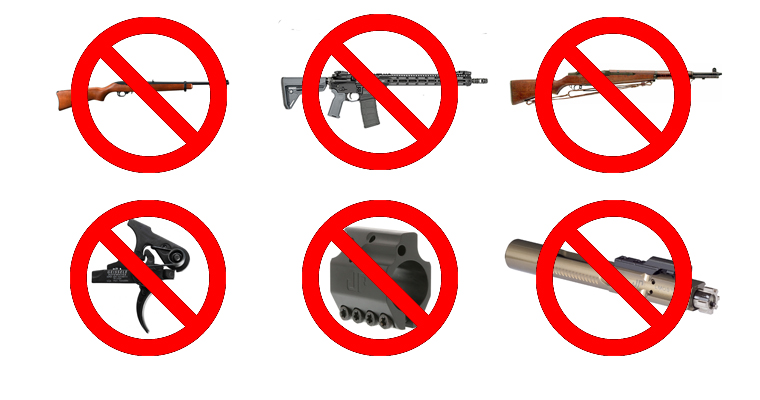 Normally we don’t like to use content from other websites but this is important enough in our opinion to do exactly that. Our friends at Criterion Barrels made us aware of the new bill being proposed to ban bumpfire stocks. That Curbelo-Moulton Bill H.R.3999 is very bad for all gun owners and reaches well beyond the “narrow ban” being discussed by politicians.

We typically don’t like to get political here at Criterion Barrels Inc., but as of late there have been some concerning legislative proposals that need to be immediately addressed. If you like firearms and possess a semiautomatic rifle, then this piece of proposed legislation involves you directly.

The website of Representative Carlos Curbelo’s (FL-26) recently announced that he “and Seth Moulton (MA-6) announced they are leading a perfectly bipartisan effort to introduce legislation to ban the manufacture, sale, and use of “bump stocks.” The Members hope to introduce and move this legislation as quickly as possible.

Moulton’s and Curbelo’s legislation would be structured in the Noah’s Ark style, meaning Members would have to sign on as a co-sponsor with a Member from the other Party. Currently twenty representatives have co-sponsored this bill.”

This means that a total of ten Republican representatives have discarded their support for the Second Amendment by pushing for far-reaching gun control legislation. Here are the representatives currently co-sponsoring this bill:

While many in the firearm community have controversially withdrawn their support of bump fire stock possession and other devices designed to simulate a fully automatic rate of fire due to the recent tragedy in Las Vegas, this new bill featuring poorly worded legislation seeks to indirectly implement a blanket ban of nearly every semi-automatic rifle system currently in existence.

While the full text of the proposed bill can be found through the above link, the portion that raises the most concern involves the following verbiage:

“To amend title 18, United States Code, to prohibit the manufacture, possession, or transfer of any part or combination of parts that is designed and functions to increase the rate of fire of a semiautomatic rifle but does not convert the semiautomatic rifle into a machine gun, and for other purposes.”

The language of this paragraph extends far beyond bump fire stocks, or even other “controversial” bump fire devices such as rubber bands, pieces of string, and belt loops. The vast majority of factory and aftermarket components currently available for semiautomatic rifle platforms are designed to improve performance of the rifle system, allowing the shooter to more effectively place rounds on target in a shorter time span (therefore increasing the effective rate of fire of the rifle).

Possession of virtually all magazines (regardless of capacity), aftermarket triggers, buffers, buffer springs, adjustable gas blocks, and a variety of other components would be immediately rendered illegal through the far-reaching and poorly worded language of this bill. There is no grandfather clause, with only a ninety-day amnesty period offered prior to enactment of the act. After that amnesty period nearly every owner of a semiautomatic rifle with a magazine of any capacity would be immediately classified as a criminal.

This bill doesn’t simply apply to bump fire stocks. It doesn’t just apply to the AR-15. This bill would apply to semiautomatic .22 squirrel rifles that feed from magazines and feed tubes. It applies to M1 Garands and their en bloc clips. It applies to aftermarket trigger and gas system upgrades like those offered by fine brands such as Geissele and JP Enterprises. The gun community has been divided on the bump fire stock question, but we cannot remain divided on this bill. If it passes, millions of law abiding gun owners will instantly qualify as criminals. Enforcement of this legislation will likely increase gradually over the next few decades, using this bill as a legal precedent to restrict magazine size, prohibit use of match triggers and components, and eventually push for a comprehensive ban of semiautomatic rifles.

Click to view a pdf of the bill in it’s entirety Curbelo-Moulton Bill (H.R.3999) Seeks to Effectively Ban Most Semiautomatic Rifles