Soldier Systems: According to multiple sources, what started out as a directed requirement for a 7.62 NATO Designated Marksmanship Rifle for issue to Infantry Rifle Squads has grown in scope to increase the Basis of Issue to all personnel in Brigade Combat Teams and perhaps beyond. The genesis of this requirement is overmatch. The troops feel like they’re in a street fight with a guy with longer arms. The 7.62x54R cartridge gives the enemy those longer arms.

Consequently, the Army wants to enable the rifleman to accurately engage targets at a further range than the current 5.56mm. Although at this point, I’ll keep that exact exact distance close to the vest. The goal here is to foster a dialogue about the 7.62 requirement in general, and not offer operational specifics.

It’s important to establish right up front that 7.62mm is not the Army’s end goal. The “Interim” component of this capability’s name relies on a plan to eventually adopt one of the 6.5mm family of intermediate calibers. Currently, elements of the Army are evaluating .260, .264 USA and .277 USA. The .260 is commercially available while .264 USA and .277 USA are developments of the Army Marksmanship Unit. Unfortunately, the US Army doesn’t plan to conduct an intermediate caliber study until the early 2020s. That’s why they want to adopt 7.62mm now. The idea is to adopt the Battle Rifle to deal with a newly identified threat with what’s available now, and transition the fleet to an intermediate caliber cartridge, once its selected. Additionally, the transition to this proposed intermediate caliber cartridge is possible from a 7.62 platform. Such a transition is all-but-impossible with the current 5.56 receiver sets.

The path of least resistance may well be to adopt an existing 7.62mm Government Off The Shelf (GOTS) weapon. It means less oversight and is quicker to put in action. There are currently four options, although the first one I’ll mention hasn’t even been discussed.

First up is the M14 Enhanced Battle Rifle. This option, isn’t even really an option. Brought back into limited service during the early years of the war, it suffers from numerous shortcomings. However, it did validate the need for a 7.62 rifle option.

Second, is the Mk17 SCAR-H. Built by FN, and designed to meet USSOCOM’s SOF Combat Assault Rifle requirement, it is a modular platform with a simple swap from one caliber to another. This makes it very attractive for a planned transition to a new cartridge. However, the platform was adopted after a competition between 5.56 weapons and was not evaluated for adoption against other weapons in its 7.62 configuration. USSOCOM recently removed all of its SCARs from service so they are there for the taking. Unfortunately, it’s not a panacea. There aren’t nearly enough in inventory so the Army would have to buy more, but that’s true of any of the GOTS options. Finally, the Mk17 uses a proprietary magazine, adapted from the FN FAL which is less than ideal.

The third option is the M110 Semi-Auto Sniper System. Currently in service with the Army as a Sniper weapon, it is manufactured by Knight’s Armament Co. As a system, SASS comes with a rather expensive optic and some other accessories not for general issue. On the plus side, it has been adopted by numerous other user groups and a multitide of variants are readily available. It uses what most believe is the best of the 7.62 AR-style magazines and is considered industry standard. 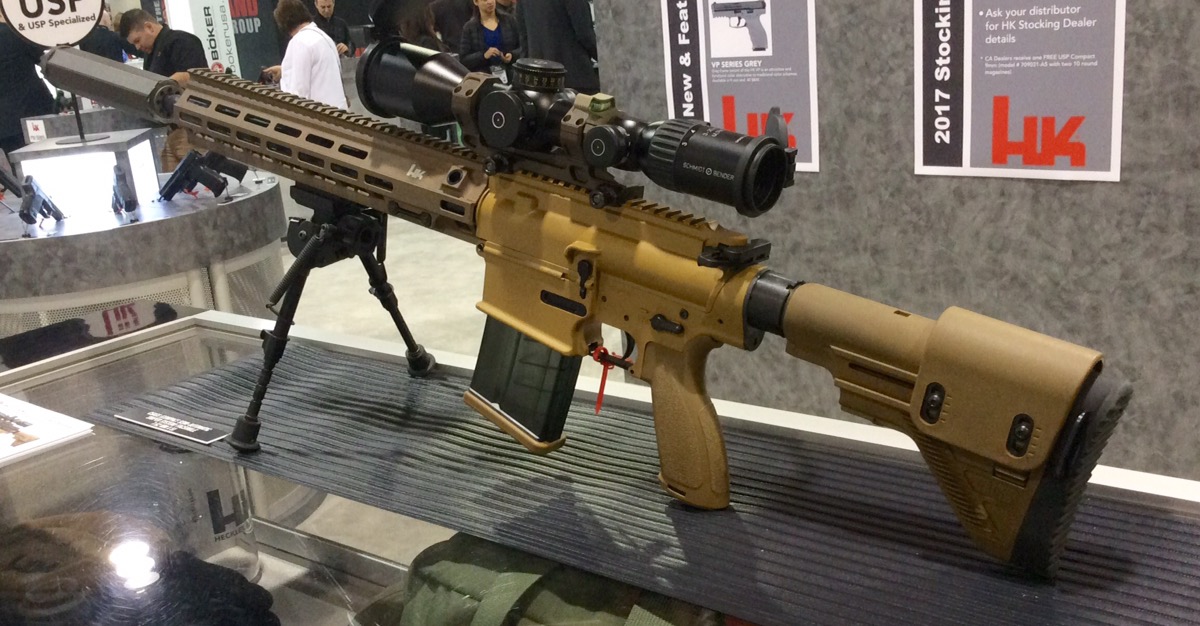 The final GOTS option is the newly adopted M110A1, Compact Semi-Auto Sniper System. Manufactured by H&K, it is a variant of their HK417 platform, or more specifically, an Americanized G28 sniper rifle. It utilizes a piston system which many prefer over the M110’s M4-style direct impingement gas operating system. However, as a weapon system, it incorporates an expensive optic and a rather unconventional suppressor system. Additionally, it uses a proprietary magazine. Essentially, it would need to be “dumbed down” for general issue.

It’s important to note that if any of one these platforms is adopted for this role, it will require some changes as mentioned above because they were all adopted for other requirements.

However, the Army may evaluate these GOTS platforms and determine that none of them meet their requirement. In this case they may very well issue an RFP to industry. There are definite long-term advantages to this course of action. For example, the Army can get exactly what they want, rather than adapting a weapon originally procured for another purpose. Additionally, the Army can leverage the latest in small arms technology such as the new short frame receivers. Interestingly, these may well turn out to be more appropriate for use with an intermediate caliber cartridge.

In order to take full advantage of the range of the 7.62 cartridge, the current draft requirement for the IBR calls for a 1×6 variable optic.

Obviously, a transition to the heavier 7.62 cartridge means a reduction in the basic load of the Soldier, to just under half of the current 210 rounds. That is a serious consideration; perhaps the most important for Army leaders to contemplate. Obviously, transition to the intermediate caliber cartridge will mean more bullets per Soldier, but there must be continued development of polymer cases or telescoping rounds to take fully realize this increase in lethality.

Other factors to consider are the additional weight and recoil of a 7.62mm Battle Rifle. Let’s face it, the military transitioned from the M14 to the M16 for multiple reasons, and one of those was weight savings. Soldiers are also going to require additional training to take full advantage of the new capability. Increased engagement distances also mean Soldiers will require access to longer marksmanship ranges.

Additionally, word is that the Army desires a sub-MOA gun. If this is true, they are setting themselves up for failure because M80 Ball is not sub-MOA ammunition. Even the M110 is required to often 1.3 MOA accuracy. Something similar occurred in USSOCOM’s Precision Sniper Rifle program where the ammo was not spec’d to the same level of the rifle which fired it. If the Army tests any of these rifles, even if built to deliver sub-MOA precision, with an ammunition which delivers 2-3 MOA, they will get 2-3 MOA results. It’s the old story of the weakest link, and the capability will be considered a failure because all of the variables weren’t considered. You want an accurate rifle? Make sure you use accurate ammunition.

Then, there’s this whole ‘interim’ concept. Too many times I’ve seen capabilities that were sold initially as an interim and ended up never being replaced with the proposed final capability. There’s always a chance our Soldiers could get stuck with a 7.62 rifle if the planned caliber study doesn’t pan out or worse yet, DoD faces another budget challenged situation similar to the sequester. As we’ve learned, we go to war with the Army we have, not the one we wish we had.

While the change to the intermediate cartridge could be accomplished with bolt and barrel swaps, which is less expensive than completely new rifles, the Army will still need to transition to a new ammunition. That would be two ammunition transitions in less than a decade and three within 15 years, if you consider M855A1.

To be sure, this is a very exciting opportunity for the US Army. It could well mean the first major upgrade to the Soldier’s individual weapon in half a century. My concern, as always, is that the Army doesn’t rush into something it will regret, and that it creates a realistic requirememt, having considered all factors, including ammunition and magazines, which continue to plague the M4. As the DoD budget grows over the next few years, there will be money enough to make rash as well as bad decisions.

On the other hand, there will be institutional momentum against this concept. The Army must not let those voices drown out the requirement to overmatch the reach of our enemies on the battlefield. If the requirement is valid, then it must be supported. The rifle is the most basic weapon in the Army’s inventory.

Instead, the Army must navigate the middle path, carefully considering its near and long-tern requirements. The M16/M4 with its 5.56mm caliber have been in service for over 50 years. The next rifle may well be in service just as long. Or, until Phased Plasma Rifles in the 40-watt range, are available.

Based on briefings conducted at the NDIA Armaments Conference by PEO Soldier’s PM Weapons team, along with discussions with industry, we have an update on Army plans to field a new 7.62 NATO capability within the next 24 months.

First off, although a contract has been awarded for H&K’s Compact Semi Automatic Sniper System, the weapon remains unfunded for FY17. Currently, type classification is planned for FY18. 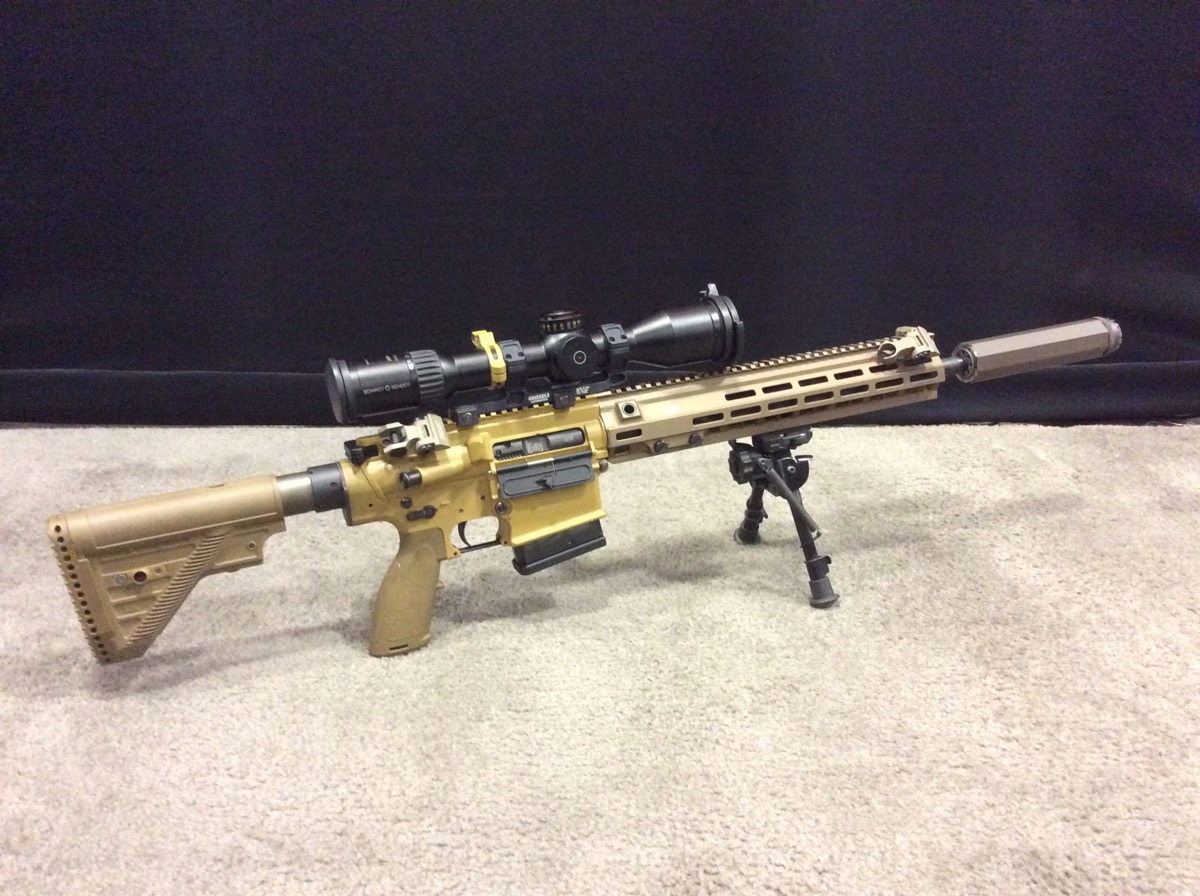 However, the Army is also committed to concurrently fielding an SDMR based on the same platform as the CSASS.

According to briefing slides provided by PM Soldier Weapons, an Army directed requirement to engage enemy personnel at the Squad level from 0-600m, dated December, 2016 will purchase “6,069 HK G28E rifles” via an urgent material release.

The Army plans to use the existing M80A1 ammo for the SDMR, which is a 7.62 version of the 5.56mm M855A1. The rifles are said to be configured in a similar fashion to the CSASS, with Geissele M-Lok rail and OSS suppressor. However, the SDMRs will be outfitted with an as-of-yet still unselected 1-6x variable optic rather than the CSASS optic from Schmidt & Bender.

While there has been talk of adding up to two SDMRs per Squad, internal Army discussions continue about expanding the basis of issue of a 7.62 rifle, now referred to as the Interim Service Combat Rifle to all BCT members. However, there is still no formal requirement for the ISCR, and acquisition officials are leaning forward on the foxhole in anticipation, prepared to make this happen as quickly as possible.