(Geneseo, IL – May 21, 2015) 308AR.com The countdown has begun for the 2015 National Matches at Camp Perry, OH, where only the best of the best compete in what is considered the “World Series of the Shooting Sports.” Competition at the highest level requires only the best equipment and Armalite is here to deliver!

For more than a decade, Armalite rifles in both the AR-10® and M-15™ platforms have decorated the firing line as the choice of some of the best shooters on the National Match circuit. Join them by ordering one of the following Armalite National Match rifles today!

This rifle is superbly accurate and ready for long-range match domination out of the box. Chambered in 7.62x51mm, this rifle features a 20-in. triple lapped, AISI 416R stainless steel match barrel with a 5/8×24 thread and stainless steel flash suppressor. It comes with a forged, flat-top receiver with a MIL-STD 1913 rail and forward assist, a two-stage National Match trigger and weighs 11.5 lbs. MSRP: $2,365

Developed by, and for, the National Match shooter, the Armalite M-15A4 National Match Special Purpose Rifle allows for more versatility in sighting options for other applications while conforming to match regulations. This rifle is chambered in 5.56x45mm, features a 20-in. triple lapped, AISI 416R stainless steel barrel with National Match sleeve, 1/2×28 thread and flash suppressor. The forged, flat-top upper receiver has a MIL-STD 1913 rail with detachable National Match carry handle for the addition of optics. The two-stage National Match trigger finishes out this rifle making it the ideal firearm for competition. MSRP: $1,435

So you want a lightweight 308AR/AR-10 style rifle. Well DPMS has redesigned their LR-308 308AR platform ad created some pretty light rifles, in the 7 pound range in their new GII series. They have also increased the parts compatibility with the AR-15 but that is a story for another day.

The GII MOE Carbine is for the .308 shooter who wants certain enhancements. This rifle, along with the AP4, is the lightest model GII rifle, coming in at 7.25 lbs. Add in the complete MOE furniture kit and you have one badass enhanced carbine that will turn heads at the range.

The dual-charging PSC-12™ upper assembly features all the utility and advantages of its predecessor, the PSC-11™, available now for large-frame AR platforms in both the DPMS LR-308 and the Armalite AR-10/Knights Armament SR-25 patterns. On the heels of the JP side-charge system’s success on our other rifles, the PSC Series not only offers a unique new take on this feature by incorporating both side-charge and traditional top-charge systems into a single upper receiver, but also by making this innovation cross-compatible with existing DPMS, Armalite and Knights Armament lower assemblies. The PSC-series combines the great features and performance of virtually our entire rifle line into a single package designed for the all-out tactical market with its redundant charging systems, dust cover and forward assist. In addition, the PSC-12™ is also available as a complete rifle built on a modified version of our LRP-07™ billet lower with the full selection of stock, grip and trigger options available. 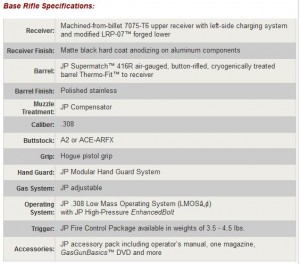 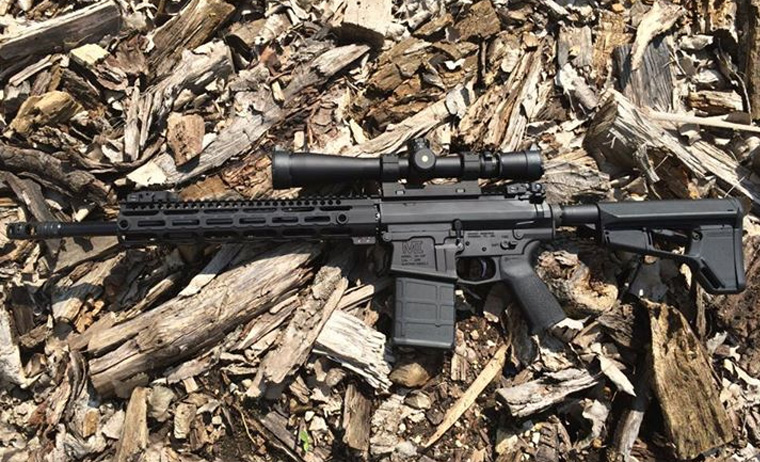 Midwest Industries has recently announced the addition of a .308 AR rifle line to their existing selection of quality production firearms. The MI-10 is currently available with a 16” barrel configuration, but plans are currently in the works to add an 18” and 20” model.

The new MI-10 will incorporate a Criterion-manufactured 416R stainless steel barrel with a salt bath nitride surface finish for extended barrel life and added corrosion resistance. 16” and 18” variants will feature a 1-10 twist, while the 20” model will come standard with a 1-11 twist rate. Each rifle will feature CBI’s M118 LR chamber, giving shooters the option to use both .308 Win and 7.62×51 NATO ammunition. The M118 LR chamber incorporates a slightly longer throat than the SAAMI .308 Win design, allowing shooters to effectively run loads with heavier bullet weights. 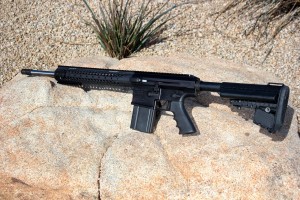 Knight’s Armament Company (KAC) is an American firearms and firearms parts manufacturer, best known for producing the Rail Interface System (RIS) and the Rail Adapter System (RAS) grips for firearms use. They currently produce a variety of firearms, specifically rifles built on the AR-15 platform. One of their best known rifles is the SR-25 semi-automatic special application sniper rifle.

KAC is owned by C. Reed Knight and is based in Titusville, Florida. Knight’s Manufacturing Company (KMC) is the division of KAC responsible for products aimed at the civilian market.

The SR-25 uses a rotating bolt and a direct impingement gas system. It is loosely based on Stoner’s AR-10, rebuilt in its original 7.62×51mm NATO caliber. Up to 60% of parts of the SR-25 are interchangeable with the AR-15 and M16—everything but the upper and lower receivers, the hammer, the barrel assembly and the bolt carrier group. SR-25 barrels were originally manufactured by Remington Arms with its 5R (5 grooves, right twist) rifling, with twist 1:11.25 (1 complete turn in 11.25 inches or 286 millimeters). The heavy 24 in (610 mm) barrel is free-floating, so handguards are attached to the front of the receiver and do not touch the barrel.

First military purchase was spearheaded by the U.S. Navy in the early 1990s; the first operational deployment and use of the SR-25 sniper rifle was with U.S. Navy SEAL snipers supporting operations in Somalia in 1993.

In the late 1950s, Eugene Stoner designed the AR-10 battle rifle to equip U.S. troops. It was accurate for an auto-loading rifle, but it lost the competition to the M14 rifle. The patent rights for the AR-10 and the AR-15 were sold to Colt’s Manufacturing Company. Colt focused on the AR-15, giving others the ability to capitalize on the AR-10 system.

In the early 1990s, Stoner joined Knight’s Armament Company. He continued his AR-10 design work and joined it with the direct gas system of the AR-15. The end result was the SR-25 (adding together the numbers of the AR-10 and AR-15) which improved the AR-10 design with M16A2 advancements and parts commonality. The original SR-25 was released in the early 1990s and had a heavy free-floating 24 in (610 mm) match grade barrel with a fiberglass handguard. It had a flat top upper receiver with a Mil-Std 1913 rail for mounting optics and a 2-stage match grade trigger. The bolt carrier was similar to the AR-10’s, being chrome plated and having a captive firing pin retainer pin. The SR-25 was designed specifically to fire 168 gr (10.9 g) open-tip match cartridges. Accuracy was guaranteed at or under 1 minute of angle. At first, AR-10 type 20-round magazines were used, but they were later replaced by steel 20-round magazines resembling those used by the M16.

The United States Special Operations Command took interest in the SR-25, particularly its high magazine capacity and faster engagement time compared to bolt-action rifles. After some modifications, SOCOM adopted the SR-25 as the Mk 11 Mod 0 in May 2000. Changes included a shorter 20 in (510 mm) barrel that could fire M118 and M118LR 7.62×51mm NATO rounds and had a quick detachable sound suppressor mount. An 11.35 in (288 mm) free-floating handguard rail system allowed mounting accessories. Flip-up front sights and adjustable back-up iron sights were added, and an M16A2 stock and pistol grip were used.

Beginning in mid-2011, SOCOM began divesting the Mk 11 Mod 0 from their inventory and replacing it with the SSR Mk 20, the sniper variant of the FN SCAR. The Mk 11 is to be completely replaced by 2017.

The SR-25 enhanced match rifle utilizes the newer URX II Picatinny-Weaver rail system, rather than the older Mk 11 free-floating RAS, on the top of the receiver to accept different scope mounts or a carrying handle with iron sights (front sight mounted on the rail located on the forward end of the non-modular handguard).[4] The match version is designed to shoot at a precision of 0.5 minutes of angle, which corresponds to 0.5-inch (13 mm) groups at 100 yards (91 m).

The Mk 11 Mod 0 system is chambered for 7.62×51mm NATO, and is designed for match-grade ammunition. The Mk 11 system includes the rifle, 20 round box magazines, QD (Quick Detachable) scope rings, Leupold Mark 4 Mil-dot riflescope, Harris swivel-base bipod on a Knight’s mount, and QD sound suppressor, which is also manufactured by Knight’s Armament Co.[1] Flip-up BUIS (Back up iron sights) are attached to the modified gas block and upper receiver.

During the Iraq War, the United States Marine Corps ordered 180 Mk 11 Mod 1 rifles. These were Mk 11s equipped with the upper receiver of the M110 Semi-Automatic Sniper System. The M110 upper gave the Mk 11 Mod 1 a URX modular rail system and a flash suppressor on the barrel. These saw limited use before they were phased out when the Marines chose to purchase the Mk 11 Mod 2, which was simply the USSOCOM and U.S. Navy designation for the complete M110 rifle.[5]